No one was injured, Volmer said.

According to a statement released by Southwest, the passengers were then moved to a different aircraft to resume the flight to LAX.

The statement from Southwest Airlines reads:

The pilots of flight 604 operating today from Salt Lake City International Airport (SLC) to Los Angeles International Airport (LAX) elected to return to SLC after receiving a cockpit indication of a performance issue with one of the aircraft engines. Following established protocol and procedures, the pilots completed an uneventful landing. The customers will be swapped to a new aircraft to continue the flight to LAX. We apologize for the inconvenience, but safety is always our top priority at Southwest Airlines. 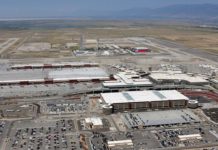