A tweet from UDOT’s official Twitter page for the I-15 Technology Corridor said the closures will begin Monday night. State Street in that area will close at 9:30 p.m. and reopen at 5:30 a.m. Mondays through Thursdays and from 11 p.m. to 8 a.m. Fridays.

Drivers are being asked to use Lehi Main Street and 850 East as detour.

The $450 million Technology Corridor started construction in spring 2018, with the aim of to widening I-15 to six lanes in both directions between Timpanogos Highway (SR-92) and Lehi Main Street. This is the last remaining section of I-15 between Salt Lake City and Spanish Fork where the freeway is still only four lanes wide, officials said.

Other project improvements include a new overpass to extend Triumph Boulevard over I-15, and upgrades to the SR-92 and 2100 North interchanges. This project will be completed in late 2020.

For more information about the Technology Corridor, click here. 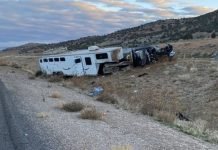 1 adult dead, 1 adult, 4 children injured in crash on I-15 near Scipio 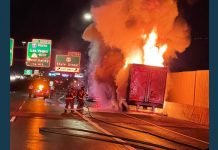