WEST VALLEY CITY, Utah, Nov. 13, 2021 (Gephardt Daily) — The suspect arrested in a dramatic SWAT standoff in West Valley City overnight is now believed to have held a woman against her will inside a home for days, and may be involved in another woman’s shooting death.

He also is accused of forcing his alleged victim to drink WD-40, police said.

According to a probable cause statement filed in Salt Lake County’s Third District Court, Garman Shaun Cunningham, 50, has been charged with:

Exclusive Video: Gephardt Daily/Monica Garza/SLCScanner
.
In a sworn statement, a WVCPD officer said the overnight SWAT standoff began to unfold about 10:08 p.m. Friday, when dispatchers received a domestic violence call with a report of a man with a gun in the 3300 block of S. Greenmont Drive. “It was reported that Garman Shaun Cunningham 02/16/71 had a gun and was holding a victim hostage since November 1,” the officer’s statement said. “The victim reported that Garman had shot multiple rounds with a handgun.”

The woman also told police “Garman held a gun to the victim’s head, cut the victim with glass and a knife, and forced the victim to drink WD-40,” according to officer’s statement.

“During the entire length the victim was held hostage, the victim was only allowed to have very little food and was not allowed to sleep,” the officer said. “The victim felt that if they told Garman that they did not want to have sexual intercourse that Garman would most likely kill them. This was a strong belief due to witnessing a female already get murdered.”

Officers who arrived at the scene Friday night said “they witnessed Garman throwing objects out the window towards officers while telling them he was armed. A single shot was fired at officers by Garman,” according to the probable cause statement.

Reverse 911 calls were made to residences within a couple of blocks of the standoff and warned people to stay inside their homes.

As police began to approach the residence, Garman jumped from a window in the back of the home while wielding a sword.

“After several commands by officers were ignored to drop the sword, less lethal force was used on Garman,” the probable cause statement said.

Garman managed to escape, scaling fences and running through backyards until he was caught in front of a home about three houses to the north of where he eluded police.

Gephardt Daily’s photographer was on scene throughout the event and captured police moving to subdue Garman. He was ultimately subdued and placed in handcuffs before he was searched by officers and then examined by medics on scene.

He has now been booked into jail.

Police are asking that Garman be held without bail, saying he “poses as a substantial risk to the public” and that he “pointed a handgun at people walking down the street. Several methods of torture were used during this incident.” 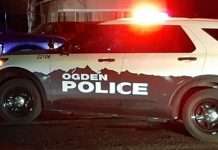 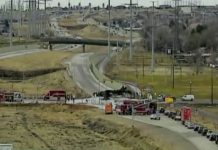 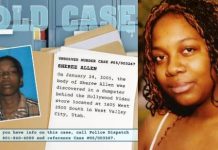