SYRACUSE, Utah, April 1, 2019 (Gephardt Daily) — When firefighters arrived at the house on Prince’s Circle and Augusta Drive late Sunday night, the attached garage was fully engulfed in flames and the fire had spread to the house.

Deputy Chief Jo Hamblin, Syracuse Fire Department, said the call came in at midnight, “straight up,” and as firetrucks neared the scene, heavy smoke and flames were visible from the entire structure.

“Crews made a good start,” Hamblin told Gephardt Daily. “North Davis, Clinton, Layton and South Weber fire departments also responded. But the fire extended into the house from the garage side, and there was significant damage to the whole structure.

“The three occupants of the home had evacuated safely, but two cats are still unaccounted for.”

At 3 a.m. Monday, fire crews were still on scene checking for hot spots, and the cause of the fire was still under investigation.

Hamblin said the entire single-family rambler may be a total loss. The residents have family close by, and will be staying with them for the time being. 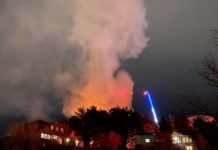 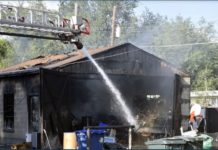