When firefighters arrived, they could see heavy smoke coming from the roof.

The fire caused severe damage to the house where it originated, and also extended into the house directly to the south.

Investigators determined the fire was started by children playing with matches in the backyard. The outside of the house quickly caught on fire before the blaze moved inside.

Twelve people are displaced due to the fire. Three people were living in the basement of the house and three people lived on the first floor of the house. Six people resided in the second home.

The total estimate of damages are not known at this time. 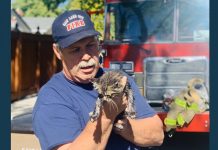