DRAPER, UTAH – August 13, 2015 (Gephardt Daily) – Draper Police are searching for a suspect who stole a distinctive company car from a local bicycle shop.

He drove away in the Subaru, which is white and was wrapped with the Canyons Bicycle logo and colors. However, it is possible the suspect removed the vehicle wrap.

Draper Police detectives are requesting the public’s help with locating the vehicle. If anyone sees the vehicle or knows anything about this theft, they are asked to call Draper Police dispatch at 801-840-4000. 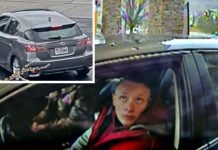