Investigators believe Petito last communicated with her family Aug. 25, saying she was  headed for the national park in Wyoming.

Days later, on Sept. 1, Laundrie, showed up at his parent’s house, in Florida, where the couple lived. He was driving Petito’s van and was alone. According to Google Maps, the drive from Grand Teton National Park to North Port, Florida, where Laundrie and Petito live, is 35 hours.

Laundrie’s family hired an attorney and is refusing to cooperate with police. He has since been named a person of interest in the case.

“On Aug. 29, my boyfriend and I picked up Brian at Grand Teton National Park, at 5:30 at night at Colter Bay,” Baker says. “I’m hoping this can help somebody identify him because I saw him from TikTok which then made me call the authorities and my boyfriend and I have been in contact with a bunch of different people to help.”

Baker says that Laundrie approached her and her boyfriend and asked for a ride as he needed to go to Jackson, and they were heading there that night. Laundrie then got into the backseat of the couple’s Jeep, Baker said.

“We then proceeded to make small talk, but before he came in the car, he offered to pay us like $200, to give him a ride like 10 miles, so that was kind of weird,” Baker says. “He then told us he’s been camping for multiple days without his fiancé. He did say he had a fiancé, and that she was working on their social media page back at their van. In conversation I brought up, yeah we’re going to Jackson, he freaked out, like nope, I need to get out right now, like, pull over. So we pulled over at the Jackson Dam… which is not very far from Colter Bay. We dropped him off at 6:09 p.m. on Aug. 29. He kind of hurried out of the car, and then was like ‘I’m just going to find someone else to go hitchhike.’ And we were like, Okay. It was a weird situation..”

Baker clarifies in the fourth video that locals call Jackson Hole Jackson, and Laundrie did not appear to know that, so when she referred to Jackson as Jackson Hole, he became agitated. “He seemed like he needed to get out, he got antsy, and that’s when things got weird…”

Baker adds: “So when we picked him up he was wearing a backpack, a long sleeve, pants, hiking boots, and he had scruff, but he didn’t look dirty. For someone who was camping for multiple days, he didn’t look dirty, he didn’t smell dirty, so that part was kind of weird. I’m just really hoping they find her and this helps someone remember seeing him.”

In a second video, Baker says that Laundrie told her and her boyfriend that he and Petito were not camping in a regulated National Park Service campsite, that they were camping “out in the middle of nowhere” along Snake River.

“He said he had hiked for days along Snake River,” Baker says. “But looking at his backpack, it wasn’t full, and he said all he had was a tarp to sleep on, which you’d think if you were going camping for days on end, you’d want food, and a tent, and he had none of that, he looked clean, and didn’t smell bad.”

When they dropped Laundrie off, he said he was going to walk across the street to a car park full of people to continue hitchhiking, and look for a ride, because “he freaked out when I said Jackson Hole,” Baker says. “He said we needed to pull over.”

Baker says she did not see him pull out a phone in the time they were with him.

Baker’s first video has been viewed 1.9 million times on TikTok as of 4:30 p.m. Friday. Law enforcement sources have not revealed whether or not they’ve spoken to Baker, but did indicate there was a search underway in the Grand Teton National Park area.

The Moab Police Department confirmed its officers stopped the couple during a traffic stop Aug. 12 after a witness reported a possible instance of domestic abuse. Police released body-cam video of Petito’s and Laundrie’s field interviews after their van was pulled over. She told officers she had become agitated after Laundrie tried to lock her out of the van until she calmed down. Petito thought she was going to be left behind, she said, and inflicted minor injuries on Laundrie. Neither wanted to press charges.

While the deputies decided not to file criminal charges they ordered the couple to accept counseling services which would force them to separate for a day.

The FBI’s Denver office tweeted about its agents’ involvement in the investigation Thursday:

“The FBI is working with our partners in the Teton County Sheriff’s Office, Jackson Police Department, the National Park Service and other state & local law enforcement agencies across the country in the investigation of Gabrielle ‘Gabby’ Petito’s disappearance.” 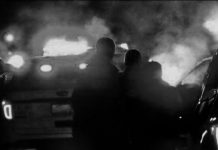