SALT LAKE CITY, Utah, May 1, 2019 (Gephardt Daily) — The Utah Department of Transportation (UDOT) has announced its list of Top 10 Construction Projects for 2019.

“Topping the list is the extension of Mountain View Corridor from 4100 South to SR-201 in Salt Lake County,” said a news release from UDOT. “This four-mile stretch of brand-new highway will provide a critical link for western Salt Lake County drivers by connecting this important north-south highway to an existing freeway.”

UDOT has 169 construction projects statewide that are currently in progress or scheduled to start this year, with a combined value of $2.1 billion, the news release said.

“Each year the department works to meet current and future growth by adding lanes and building new highways, trails, and bridges, while at the same time focusing on an aggressive maintenance program to keep the transportation system in good condition,” the news release went on. 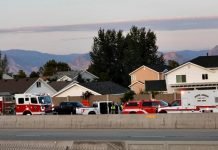