Coaches and student-athletes from U. sports programs will chat with Utes play-by-play announcer Bill Riley during “A Night at Rice-Eccles Stadium” from 7 to 9 p.m. Saturday on the field and in the Ken Garff Red Zone at Rice-Eccles Stadium. The interviews will play on the video board at the stadium throughout the free event.

The celebration also will include self-guided tours of the Utes’ game-day locker room, highlight videos from the Utes’ successful 2021-22 athletics season, and a chance to take photos with various U. backgrounds. Game-worn Utah equipment and gear also will be available for purchase, according to a news release.

Parking at the event is free in the west lot of Rice-Eccles Stadium. Fans may enter the stadium through gates A and B on the southwest corner of the stadium, athletics officials said.

Utes football coach Kyle Whittingham is among coaches expected to attend the celebration. The Utes wrap up fall camp this week and open the season Sept. 3 at the University of Florida.

Utah, which won its first Pac-12 Conference title and earned a berth in the Rose Bowl last season, enters the game ranked No. 7 in The Associated Press’ preseason poll.

“We just go about our business and don’t pay much attention to that,” Whittingham said, referring to the national ranking. “We don’t pay any attention to it actually.”

The University of Utah football team was among four Utes programs to earn conference championships last season. Eight U. teams advanced to postseason play, including the skiing program, which won its 15th national championship.

Other athletics successes last season include: 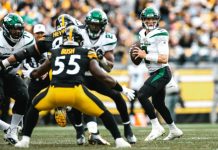