Zara Cardenas, who lives in the Rose Park area of Salt Lake City, says the 6-month-old puppy dug under a fence to escape the yard. Cardenas told Gephardt Daily she bought the odd looking merle Pembroke Welsh Corgi — who has one blue eye and one brown — in January to lift her spirits after a miscarriage.

And she named the pup after the country singer she and her late father used to listen to together.

Patsy Cline even has an Instagram following of more than 1,100 @patsyclinethecorgi.

On Sunday morning, Cardenas posted on Instagram: “PATSY CLINE HAS BEEN FOUND!!!!!!
A neighbor had seen her running and picked her up but then went camping for the weekend and didn’t want to leave her at the shelter. I’m so grateful she’s home and will be paying them a reward for her safe return. THANK YOU SO MUCH to @gepdaily and all my friends and family who posted and shared I’ve been crying non-stop since she got home.”

Cardenas previously told Gephardt Daily she was upset at losing the dog, but confident that, because of Patsy’s unique look, she could post pictures on a few lost-dog social media sites and get the pooch back.

That’s when Cardenas started getting odd text messages from someone who appeared to know where the dog was.

“She went missing Thursday,” Cardenas said. “I spent six hours searching for her, thinking it was likely someone picked her up and was keeping her. I called all the animal shelters.”

So Cardenas posted the missing dog messages online, to let people know the lost dog was hers.

“The first night she went missing, I got a text saying someone had found her, and sent a six-digit Google Code to verify I was the owner.”

One of Cardenas’s apps alerted her the transaction was likely to be scam-related.

“It’s really cruel that they are preying on people who are suffering a loss,” she said, crying.

“Then a woman messaged me on Facebook, just her phone number, and said she has my dog.”

Cardenas messaged the woman back, and got no response. An hour later came the text: “I’m not giving you my dog.”

“I tried to explain I was not taking anyone else’s dog, and if you are holding a dog you found, that is illegal. The messages started getting more and more aggressive, which I found odd. I was just asking for my dog.”

Cardenas managed to track down the address attached to the phone number, and notified police, who told her the two messages she got both days were connected to the same person. They went over to the address, also in Rose Park, to knock on the door.

Dogs barked, but no one opened the door. Later, Cardenas got an additional Facebook message claiming the owner’s account had been hacked.

“It didn’t get to the point where she asked me for money when I mentioned I might get the police involved,” Cardenas said. “Because there’s no physical evidence besides screen shots, and she didn’t ask for money, they can’t press charges right now.”

Cardenas told Gephardt Daily she really wanted to warn other pet owners of the scams that await anyone unfortunate enough to lose a pet, then to ask the public for help to get it back. 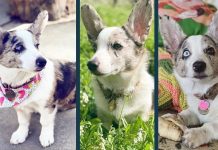