TOOELE, Utah, Oct. 25, 2020 (Gephardt Daily) — The Tooele City Police Department posted an update on Facebook late Saturday night, thanking the public for all the help that led to finding a 14-year-old girl who had been missing since Tuesday afternoon.

“Thanks to an overwhelming amount of public support, we have located missing 14 year old, Mia Richards. Thank you all for your continued help!” the post said.

Earlier Saturday, police received photos from a Maverik in Tooele, which showed the girl in the store with two other people, as well as the Ford Expedition they were driving.

The photos were shared widely on social media and in a Gephardt Daily story about the missing girl in hopes that someone would recognize the adult male and female who were with her.

In the updated Facebook post, Tooele PD did not provide any information except to say that Mia has been located. 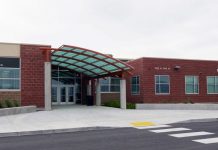