Brimley passed away after spending days in a St. George, Utah ICU unit where he had undergone dialysis while being treated for other medical issues.

He also served as a spokesman for Liberty Mutual Insurance, where he referenced his own battle with diabetes. He was also a longtime pitchman for Quaker Oats.

Brimley was born Anthony Wilford Brimley in 1934 in Salt Lake City. He dropped out of high school to join the Marines, according to his IMDb biography.

After three years of service in the Aleutian Islands, he took jobs as a bodyguard for Howard Hughes, and he worked as a ranch hand, wrangler and blacksmith, according to the bio.

Next, he worked as a background actor and stuntman in western films in the 1960s. Brimley’s breakthrough came when he appeared in “The Waltons” as resident Horace Brimley, the bio says.

His first feature film performance was in “The China Syndrome.”

Fans have listed Brimley’s “trademarks” as his gravely voice and walrus moustache, and for pronouncing “diabetes” as “diabeetus.”

On Brimley’s Twitter page, to which he last posted in 2017, he described himself as “former actor, former spokesman, former musician, current family man, adopted grandpa’ of rocky top.” 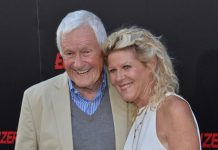