MESQUITE, Texas, Dec. 26, 2020 (Gephardt Daily) — University of Utah running back Ty Jordan has been killed in what’s being called an accidental shooting.

The University of Utah confirmed Jordan’s death is a statement posted Saturday morning:

“Words cannot express the devastation and heartache that our team is feeling right now upon learning of the tragic death of our teammate and brother, Ty Jordan. Ty’s personality and smile were infectious and he made a huge impact on our program in the short time he was with us. He leaves an indelible mark on each of us and our thoughts and prayers go out to his family and friends. From the bottom of our hearts, all of us in the Utah Football Family want to say we love you Ty and may you rest in peace.”

“We are deeply saddened and shocked to learn of Ty Jordan’s passing early this morning and our thoughts and prayers are with those who loved him dearly, including the young men in our football program. Our priority is on supporting his family and the student-athletes, coaches and staff in our football program who are so deeply hurting right now. Coach Whittingham and I are working closely to provide support and resources for our Utah Football family in this extremely difficult time.”

Details surrounding star student athlete’s death have yet to be confirmed in an official statement by law enforcement, however, varying accounts of Jordan’s death circulated on social media Saturday morning.

Friday night, The Denton City, Texas Police Department posted a series of tweets saying officers were responding to a shooting where the victim had accidentally discharged a weapon.

“There is currently a police presence in the 100 block of Avenue A. Officers responded to a shooting call and located a single gunshot victim, who was transported to a local hospital,” the tweet said.

In a second Twitter post, Denton City Police said, “Following a preliminary investigation, it is believed the gun was accidentally discharged. There is no threat to the public.”

Utah Gov.-elect Spencer Cox also posted a tweet commenting on the death of the Ute running back:

“I don’t have any info outside of what is being reported this morning, but our hearts are broken for Ty Jordan and his family. Over the past few weeks he completely won this Aggie over… our family watched so we didn’t miss a single carry. Prayers for his family and teammates.”

Jordan’s death comes just three days after he was named the PAC 12 Conference Freshman Offensive Player of the Year.

In Utah’s shortened five game season the freshman back scored six touchdowns and had run for more than 100 yards in his last three games, including 167 rushing yards against Oregon State, the most yards by a true freshman since 1995. 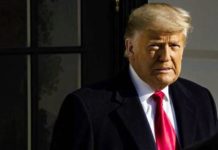 Trump before departing for Texas visit: ‘I want no violence’ 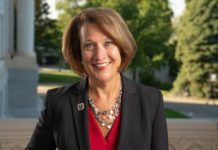