When officers arrived they found a man lying in the street and another man standing in a front yard while holding a shotgun.

After ordering the man to drop the gun police determined he was a homeowner who had just warded off an attack by a knife-carrying burglary suspect.

The suspect, who is known to police, was taken to a hospital for treatment of “non-life threatening injuries” and expected to be booked into jail on charges including aggravated robbery and aggravated assault.

Merritt said neighbors told investigators they had seen the suspect “walking up and down the street attempting to get in cars and homes, checking door handles, checking locks, checking windows to see if something was open.”

Several neighbors managed to record the confrontation between the homeowner and suspect.

Merritt said events could have taken a much more dire turn.

“It could have been a lot worse. That’s actually a deadly force situation and the homeowner would have been in his rights to pull the trigger on that when someone’s wielding a knife.” 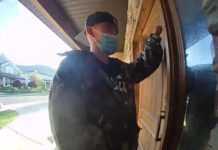