SANPETE COUNTY, Utah, Feb. 25, 2020 (Gephardt Daily) — A woman who was flown to the hospital in critical condition after the vehicle she was driving rolled Monday night on U.S. Highway 89 has died of her injuries.

Evelyn Morris, 38, and her husband, Robert, were in a 1999 Chevy Suburban traveling south on U.S. 89 just before 8:30 p.m., when a deer stepped onto the road in the lane of travel, a news release from Utah Highway Patrol said.

“The Suburban struck the deer, ran off the road to the right and rolled. Both driver and passenger were completely ejected from the vehicle, no seat belts were used,” the news release said.

The incident happened at mile marker 281, south of Fairview.

According to a GoFundMe account established for the family, Evelyn was taken off life support Tuesday morning. Robert has numerous broken bones and was scheduled for surgery Tuesday.

The couple’s four young children “could use all the love and support possible right now. Their life has been turned upside down,” the GoFundMe page says. 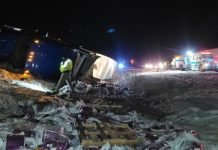