March 22 (UPI) — Two Chicago police officers have been fired for opening fire on a stolen car in a 2016 videotaped incident that ended with another cop killing the unarmed teen driver in a foot chase.

Officers Michael Coughlin Jr. and his partner, Jose Torres, both U.S. Marine Corps veterans, were dismissed late Thursday after the Chicago Police Board found in an 8-0 decision that they violated Chicago Police Department rules for shooting at the moving car, which Paul O’ Neal, 18, drove on July 28, 2016. A third officer, Jose Diaz, fatally shot O’Neal, who was unarmed, after he got out of the Jaguar and took off running through the backyards of the South Shore neighborhood.

One of the nine Chicago Police Board members recused himself during the meeting where the vote was held through teleconference because of restrictions on public meetings due to the coronavirus pandemic, the Chicago Sun-Times reported.

Their decision to open fire on the stolen Jaguar was “unreasonable and unjustified” according to the Chicago Police Board’s 27-page ruling released after the dismissals.

The board added that Coughlin’s decision to fire put fellow officers close by and other bystanders’ safety at risk.

“Officer Coughlin’s reactive decision to shoot — and keep shooting — created a chaotic situation in which any person present could have been killed,” the board wrote.

The board also discredited Coughlin’s testimony from his disciplinary hearing last year that he believed the stolen car was being used as a weapon to kill Torres.

“While the Board credits the fact that the situation quickly became chaotic, Officer Coughlin’s act of unholstering his firearm before he exited his car and the fact that he shot his firearm immediately defeats his defense,” according to the board. “And while there was a brief period in which the stolen vehicle veered toward Officer Torres, the shots fired by Officer Coughlin started before — and continued after — that occurrence.”

In regard to Torres, the board criticized his decision to fire his gun after the Jaguar drove by him and was no longer a threat, adding that he shot in the direction of fellow officers, placing them “directly in harm’s way.”

Officers are generally prohibited from opening fire on a moving car if the vehicle is the only weapon being used against them, under department rules. The finding follows the now-defunct Independent Police Review Authority, which investigated the shooting, recommending back in September 2017 that Coughlin and Torres be fired. The IPRA said in its report that they risked the lives of fellow officers and innocent bystanders when they opened fire on the stolen Jaguar and there was no merit to their explanations that they were trying to stop the vehicle.

Diaz fired five times at O’Neal during the foot chase and fatally shot him in the back.

O’Neal was lying face down on the ground with three officers standing over him as Diaz was captured kicking him on body camera video, and screaming profanities, records show. O’Neal was also handcuffed as he lay dying.

When the IPRA asked Diaz why he kicked the teen, he responded, “anger, rage, frustration.”

The IPRA recommended a six-month suspension, concluding he “genuinely believed” O’Neal had a gun, but citing him for kicking him and yelling profanities at him, but Diaz has fought the suspension.

The killing of O’Neal came amid the Chicago Police Department undergoing a U.S. Department of Justice probe of its policing practices stemming from the court-ordered release in 2015 of police dashboard camera video of Officer Jason Van Dyke fatally shooting 17-year-old Laquan McDonald on October 20, 2014.

In October 2018, Van Dyke was found guilty of second-degree murder in the McDonald case with surveillance footage showing that he appeared to shoot McDonald while he was walking away from him, and last year he was sentenced to nearly seven years in prison.

A week after Diaz fatally shot O’Neal, the IPRA released body camera and dash camera videos of the incident. 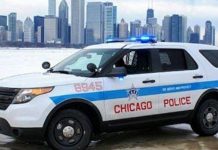 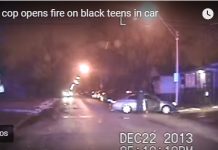