March 18 (UPI) — At least 30 were killed on Saturday in air attacks on the rebel-held enclave of Eastern Ghouta and thousands of people fled the Damascus suburb.

Syrian Observatory for Human Rights said the Syrian government attacks led to thousands of people abandoning their homes with whatever they could carry, desperate to escape fighting between rebels and military forces.

“Ongoing exodus of the citizens from Ghouta raises to about 50,000 people displaced … in less than 72 hours with an increasing death toll and ongoing shelling and clashes,” according to SOHR.

Dozens were injured in the attacks, adding to Friday’s deadly outcome after airstrikes killed more than 40 civilians, including six children, in rebel-held areas.

On Thursday, thousands fled the enclave of Eastern Ghouta as Syrian President Bashar al-Assad‘s government forces advanced into rebel-held areas — making it the largest mass displacement in the enclave since regime forces and their allies first began their siege of the area in 2013.

Mysa Khalaf, United Nation Refugee Agency spokesperson, said the actual number of people who have exited Eastern Ghouta is not known, nor are the destinations of all evacuees.

“The overall humanitarian scene is dire. The UN has delivered emergency items such as food, mattresses, blankets and hygiene kits and is preparing for further assistance to be delivered in response to the growing numbers of people arriving at the shelters,” Khalaf said, describing scenes at shelters. “Mobile clinics are providing medical services and vaccinations to children under five. Those in need of medical care are being treated at hospitals in Damascus.”

Since Feb. 18, the SOHR estimated 1272 civilians, including 252 children and 171 women, had been killed by aerial, rocket and artillery shelling on Syrian cities and towns. 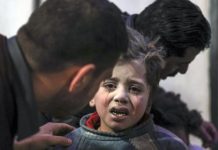 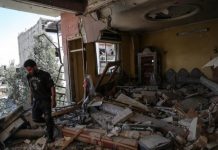 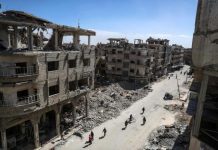