The shooting happened late Thursday in Morgan County, southwest of Huntsville. When officials arrived, part of the home was on fire.

“It is a horrific scene and to be able to process it will take some time,” said Mike Swafford, Morgan County Sheriff’s Office public information officer.

Swafford told Al.com that investigators believe a suspect or suspects went to the residence with the plan to shoot the victims. Some of the bodies had multiple gunshot wounds.

The MCSO identified the victims as Tammy England Muzzey, 45; Emily Brooke Payne, 21; Roger Lee Jones, 19; Jeramy Wade Roberts, 31; and William Zane Hodgin, 18. They declined to release the name of a 17-year-old woman and were working to identify a final victim, an adult male. 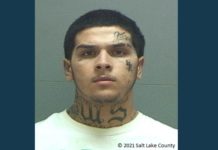