CHEYENNE , Wyo., March 18 (UPI) — More than a dozen Air Force airmen are under investigation for off-duty “illegal drug activity” at the Wyoming nuclear missile base they protect, the latest in a series of scandals to rock the Air Force’s intercontinental ballistic missile program.

Gen. Robin Rand, leader of the Air Force’s Global Strike Command, said there are “credible” allegations the 14 airmen at F.E. Warren Air Force Base, ranging in rank from airman to airman first class, were involved in illegal activity. Rand would not provide further details about the investigation. The airmen have been removed from duty during the investigation.

“I’m not going to go into the specific details,” Rand said. “I will tell you that it came to light because of one airman who had suspected drug activity by another and he reported that to his chain of command. We’re going to stop at that point, and I’m not going to speculate on the others at this time because it is under investigation.”

In 2014, nine officers at Malmstrom Air Force Base in Montana were fired after investigators found the officers had cheated on proficiency exams. The investigation also found nearly 80 other officers cheated on the monthly tests.

In 2013, Maj. Gen. Michael Carey, head of the entire ICBM force, was fired for drinking excessively and acting erratic during an official trip to Russia 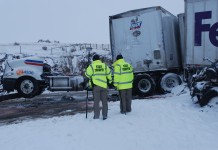 Fast Speeds and Blizzard Conditions Cause Huge Pile-Up Near Cheyenne