May 20 (UPI) — Annie Glenn, an advocate for those with communications disorders and widow of astronaut John Glenn, died Tuesday of complications from coronavirus, her former employer, Ohio State University, said. She was 100.

Annie Glenn died in St. Paul, Minn., where she had moved to a senior living facility to be closer to her daughter, Lyn.

“In just a moment spent with Annie and John Glenn, it was immediately evident that they were a team. They had known each other since childhood, and their close partnership throughout life uplifted countless Americans. Together, they helped shape the very fabric of our country. Their legacy of extraordinary public service will live on at Ohio State and across the nation.”

Annie Glenn was a former OSU adjunct professor of speech-language pathology, a subject dear to her because of her own stuttering for the first five decades of her life. The school awarded her an honorary doctorate to recognize her advocacy for the issue.

“Annie Glenn was introduced to the world by Senator John Glenn after his orbit of the Earth, but we really came to know her years later when she found her voice after conquering a profound stutter,” said Trevor Brown, dean of the John Glenn College of Public Affairs.

“The world is better for it. Annie was kind at heart, determined in spirit, and generous to everyone she met. She was both a devoted partner and a singular individual, a person of great strength and love.”

Born in Columbus, Ohio, in 1920, Annie Glenn attended Muskingum University along with John Glenn. They married in 1943 and had two children — Lyn and David.

John Glenn became a household name in 1962 when he became the first human to orbit the Earth. Speaking to UPI on the day of his historic flight, Annie Glenn said she was “very happy” he returned safely to Earth. She said a prayer and broke out the champagne to celebrate with her friends and family watching at home.

OSU said the Glenn family would hold a virtual memorial service for Annie Glenn at 11 a.m. June 6 at the Broad Street Presbyterian Church in Columbus, Ohio. OSU will live stream the service on its website. 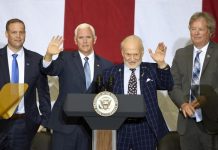 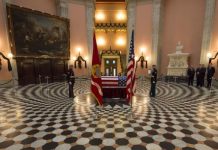 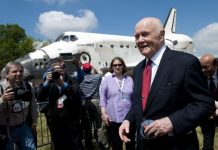