Oct. 9 (UPI) — The 5th U.S. Circuit Court of Appeals late Friday temporarily allowed Texas’ near-total abortion ban — the strictest in the nation — to again be enforced after freezing a federal judge’s temporary block of the law. The state appealed the order just two days after it was issued.

The court would not be determining the overall case’s outcome at this point — but it would decide whether the law could continue to stand while court proceedings unfold.

In their request for an emergency stay, Texas attorneys argued that U.S. District Judge Robert Pitman’s order to temporarily block enforcement of the state’s abortion restrictions “violates the separation of powers at every turn.”

“Great news tonight, The Fifth Circuit has granted an administrative stay on #SB8,” Paxton tweeted. “I will fight federal overreach at every turn.”

Senate Bill 8 bans abortions as early as six weeks into a pregnancy, before many people know they are pregnant. The law has mostly flouted the constitutional right to have an abortion before fetal viability established by Roe vs. Wade in 1973 and subsequent rulings.

That’s because it leaves enforcement of the new restrictions not to state officials but instead to private citizens filing lawsuits through the civil court system against people who perform or assist someone in getting an abortion. The law lays out a penalty of at least $10,000 for people or groups that are successfully sued.

The abortion law allows for retroactive enforcement — meaning those who helped someone get an abortion while the law was blocked for two days can now be sued.

A day after Pitman’s order, at least one major provider in the state — Whole Woman’s Health — had quickly begun performing abortions that Texas lawmakers sought to outlaw. It appears the clinics and doctors who performed abortions outlawed by the statute would now be vulnerable to lawsuits after Friday’s order.

“We do understand that it does open us up to some risk. We have to wait and see,” said Amy Hagstrom Miller, CEO of Whole Woman’s Health. “We have a lot of lawyers on speed dial these days.”

Miller said her organization and physicians in her clinics are on edge.

“But not for a second do we question that it was the right thing to do,” she said. “People need our help, and they shouldn’t be put through this.”

The organization will comply with the law once again, she said. Already several appointments had been made for Monday, so clinics will have to cancel them.

“Unfortunately, there’s going to be a lot of phone calls we have to make,” she said.

Kim Schwartz, media and communication director for the anti-abortion group Texas Right to Life, said her organization didn’t have concrete plans to file lawsuits yet but is “interested” in the possibility.

“Whole Woman’s Health is going to be vulnerable to lawsuits because they chose to violate the statute over the last couple days,” she said.

The organization previously vowed to seek legal action against any violators of the law when credible evidence exist. Since the law first went into effect, it has not yet filed any lawsuits made possible by SB 8 against those who have helped someone get an abortion.

“This ruling is an answered prayer,” Schwartz said. “We’re very excited about this ruling and hope to see many more victories to come.”

“This is a deeply alarming order that will allow Texas’ abortion ban to go back into effect at a time when abortion providers were quickly starting to resume abortion care for all patients,” Brigitte Amiri, deputy director of the ACLU Reproductive Freedom Project, said in a statement. “Today’s order means that the havoc that this law has created is allowed to restart… we hope the case moves swiftly so the law can be halted again.”

Late Wednesday, Pitman — a 2014 appointee of former President Barack Obama — forbade state court judges and court clerks from accepting lawsuits that the statute allows as part of a lawsuit brought by the U.S. Department of Justice.

In his order, Pitman called the law an “unprecedented and aggressive scheme to deprive its citizens of a significant and well-established constitutional right.”

Texas attorneys argued in their Friday appeal that the Justice Department’s request to block the law was an overstep of the federal government.

The law went into effect Sept. 1, forcing all major abortion clinics to stop offering abortions after an embryo’s cardiac activity is detected. Some providers stopped offering the procedure altogether out of fear of litigation.

The 5th Circuit already issued an emergency stay in late August to stop district court proceedings and cancel a hearing in another lawsuit challenging Texas’ abortion law. Pitman is also overseeing that case, which was brought on by abortion providers.

James Pollard contributed to this story.

UPI: This article originally appeared in The Texas Tribune. Read the original here. 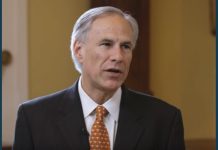