March 17 (UPI) — April the giraffe has given birth again — and like the last time, people around the world watched during a live stream online.

At Animal Adventure Park in Harpursville, N.Y., 17-year-old April became a mother for the fifth time as up to 300,000 viewers watched the live stream from inside her pen. The male calf was born at 12:43 p.m. Saturday, and so far doesn’t have a name, the Binghamton Press & Sun-Bulletin reported.

On April 15, 2017, April gave birth to a male named Tajiri with an estimated 1.25 million viewers watching. The zoo had a contest to name the newborn. She was televised for several weeks in anticipation of the birth of her fourth calf.

The latest newborn arrived less than two hours after zookeepers announced on Facebook that April was in labor.

The calf was on the ground nearly motionless for a few minutes until raising its head and interacting with April, KABC-TV reported.

“Success! We are thankful to have a healthy calf on the ground, nursing and bonding with mom. With wild giraffe numbers plummeting annually, every calf born counts,” Jordan Patch, owner of Animal Adventure Park, told the Binghamton Press & Sun-Bulletin. “Captive management programs, with successful propagation initiatives, hold the bloodlines that can someday repopulate natural ranges, should we as humans learn to preserve and protect natural environments and their inhabitants.” 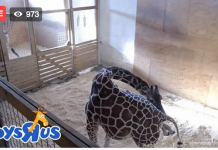 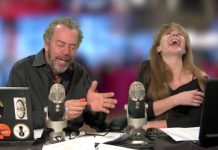