June 25 (UPI) — At least 140 people were killed in eastern Pakistan Sunday when an overturned oil tanker exploded as people attempted to collect spilling fuel in containers.

Punjab government spokesman Salman Sufi told CNN another 130 people were injured in the incident and a state of emergency has been declared in the area.

Police official Mohammad Akhtar said the truck fell off the road as it traveled through the city of Bahawalpur.

The BBC — which said the death toll could increase — reported it appears the tanker blew a tire while the driver was rounding a sharp bend in the road in the Kachi Pul area.

“People living in roadside villages, carrying domestic pots, rushed to the scene to collect oil and they also made phone calls to their relatives living in other villages to immediately come to collect oil,” the British broadcaster quoted an unnamed source as saying. 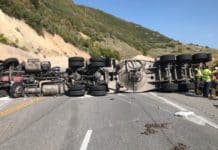