March 29 (UPI) — Authorities in New York said two men were arrested for allegedly using a dog as a drug mule to smuggle 22 pounds of heroin from Puerto Rico.

Queens District Attorney Richard Brown said the dog was shipped in a crate from Puerto Rico to John F. Kennedy International Airport, where it was picked up by Samuel Seabrooks, 35, and Carlos Betancourt-Morales, 27.

The men were stopped by police before leaving the airport Friday and a search warrant executed on the crate the following day discovered a false bottom hiding 22 pounds of heroin, worth more than $1 million.

The heroin had been separated into 10 bricks, each marked with a Nike-style Swoosh and a five-point star.

“It’s alleged that man’s best friend was used in an attempt to smuggle drugs into the city, but great police work led to the seizure of more than 10 kilograms of heroin concealed within a dog crate,” Brown said in a news release. “The defendants are alleged to have conspired to bring the drugs to New York City and elsewhere.”

The alleged smugglers used the same route as the Sato Project, a Brooklyn-based group that ships adoptable rescue dogs to New York from an animal dumping beach in Puerto Rico.

“(Whoever put the drugs in a canine carrier) not only placed an innocent animal in great danger, but by associating rescuing with criminal activity, it undermines the incredibly hard work that The Sato Project and other organizations have put in to developing their rescue programs and to saving thousands of dogs’ lives,” Sato project founder Chrissy Beckles told WPIX-TV.

“We hope that this terrible abuse of the good will and trust established by rescue organizations will not make it harder for us and other organizations to continue our lifesaving work of rescuing hundreds and thousands of dogs every year from a life of suffering and abuse on the streets and beaches of Puerto Rico, and finding them loving homes with families in the U.S.,” she said.

Seabrooks and Betancourt-Morales have been charged with drug possession and conspiracy. They face up to 20 years in prison if convicted, Brown said. 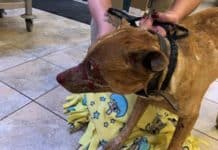