They also heard from the head of D.C. Central Kitchen about the nonprofit, which recycles food from local caterers, restaurants and hotels to provide its meals.

Biden expressed his gratitude for the kitchen’s workers, saying he was thankful for “the people standing right next to me.”

The president and first lady traveled to Nantucket, Mass., Tuesday night where they will spend the Thanksgiving holiday to revive a family tradition.

In Biden’s 2017 memoir Promise Me, Dad the president said Thanksgiving was the first holiday he and his wife spent together with his sons while he was serving in the Senate after his cheif of staff suggested they celebrate the holiday with “the nuclear family alone.”

“I wasn’t sure what exactly he was trying to say, until he explained it might be easiest on everybody if the four of us — me and Jill, Beau and Hunt — went away alone,” Biden wrote. “He suggested the island of Nantucket, which was an hour by ferry south of Cape Cod. Neither Jill nor I had ever been there, but we decided to go ahead and make an adventure out of it.”

The trip became a yearly tradition, but the Biden family opted not to travel to Nantucket for Thanksgiving last year due to the COVID-19 pandemic. 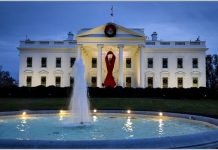 Biden unveils strategy to end HIV/AIDS epidemic in U.S. by 2030