May 24 (UPI) — U.S. Secretary of State Antony Blinken said Sunday that President Joe Biden remains committed to a two-state solution in Gaza while continuing to provide to  Israel “the means to defend itself.”

Appearing on ABC News’ “This Week” Sunday, Blinken stressed that a solution to the conflict between Israelis and Palestinians must end in a way that allows them both to live with “equal measures of security, of peace and of dignity” as he said Biden has been “very clear that he remains committed” to a two-state solution.

“Ultimately it is the only way to ensure Israel’s future as a Jewish and democratic state and, of course, the only way to give the Palestinians the state to which they’re entitled. That’s where we have to go,” he said.

Blinken added, however, that more conditions must be put in place to “allow both sides to engage in a meaningful and positive way toward two states” following the cease-fire between Israel and Hamas that was agreed to on Thursday.

“What I hope that everyone takes from this is that if there isn’t positive change and particularly if we can’t find a way to help Palestinians live with more dignity and with more hope, this cycle is likely to repeat itself and that is in no one’s interest,” he said.

Amid pressure from progressive Democrats to stop providing arms to Israel, including legislation introduced Wednesday to block a proposed arms sale, Blinken said the Biden administration is committed to continued support for Israel but that it would do so in consultation with Congress.

“The president has been equally clear we’re committed to giving Israel the means to defend itself, especially when it comes to these indiscriminate rocket attacks against civilians. Any country would respond to that and we’re committed to Israel’s defense,” he said. “At the same time, any arms sale is going to be done in full consultation with Congress, we’re committed to that. And we want to make sure that that process works effectively.”

Throughout the 11 days of violence, more than 240 Palestinians were killed by Israel’s aerial and artillery campaign, according to the Gaza health ministry. Another 12 people were killed by Hamas rocket fire in Israel.

Israel’s attacks also led to 1,000 residential units being destroyed along with three mosques and Gaza’s only COVID-19 testing laboratory, while 17 hospitals and clinics, as well as dozens of schools, were damaged, officials said. Fresh water, electricity and sewer service were also cut off for many Palestinians.

Blinken said the United States must address the immediate “humanitarian, reconstruction” in Gaza but said it would not work to restock Hamas’ arms and would instead pursue negotiations with “trusted, independent parties” to facilitate reconstruction.

“The fact of the matter is Hamas has brought nothing but ruin to the Palestinian people. Its gross mismanagement of Gaza while it has been in charge and of course these indiscriminate rocket attacks on Israeli civilians which have elicited the response that they did because Israel has a right to defend itself,” he said. “So I think the real challenge here is to help Palestinians and particularly to help moderate Palestinians and the Palestinian Authority deliver better results for their people. And, of course, Israel has a profound role to play in that too.” 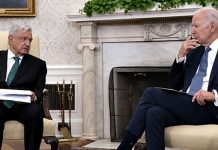