Jan. 22 (UPI) — A painting by Italian Renaissance artist Sandro Botticelli — which was found to have a hidden drawing underneath — went on view Friday in New York City ahead of its auction.

The portrait of a resurrected Christ titled “The Man of Sorrows“ is expected to fetch upwards of $40 million at Thursday’s auction as part of Sotheby’s annual Masters Week in New York City.

It is one of only three works from Botticelli’s late period — post-1492 — still held in private hands, the auction house said.

The last Botticelli artwork to go to auction, “Young Man Holding a Roundel,” set a new record for the artist, fetching $92.2 million in January 2021.

“The Man of Sorrows” attracted new attention this month, though, after Sotheby’s researchers discovered the painting held a secret — a hidden drawing of a Madonna and child underneath the layers of paint.

Infrared imaging of the painting revealed the partial and unrelated drawing, indicating the panel was originally meant for a different subject. The outlines of the mother and child are upside down compared to the final painting of Christ, showing the figures pressed together cheek to cheek in an embrace.

“The head of the Christ Child, with his upward gaze, is supported by the left hand of the Madonna, and the thick folds of her mantle are visible at her shoulder near the right of the composition,” a description of the painting on the Sotheby’s website says.

“This particular compositional pose is found in a number of paintings by Botticelli and from his workshop, indicating that the earlier idea for a painting of the Madonna, a mainstay of Botticelli’s production, was replaced with what would be a virtually unique and inspired invention by the master.”

Sotheby’s said Botticelli was inspired by the fanatical preaching of Dominican friar Girolamo Savonarola when painting “The Man of Sorrows,” which depicts Jesus with crucifixion wounds, a crown of thorns and a halo of tiny angels. Savonarola preached against sin and encouraged the burning of artworks considered to be a luxury or idolatrous. 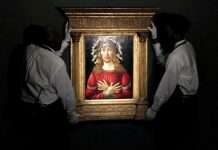 Botticelli painting with hidden drawing sells for $45.4M at auction