June 25 (UPI) — Britain’s Prince William arrived Monday in Israel as part of a historic five-day tour of the Middle East that marks the first-ever official visit by a member of the royal family.

Second in line to the British throne, William, formally known as the duke of Cambridge, arrived in Tel Aviv after departing from Jordan. He is expected to tour the Western Wall, Muslim and Christian holy sites, and occupied Palestinian territories.

The prince’s trip was announced in March and welcomed by Israeli and Palestinian officials.

British royals have historically declined invitations for official state visits to Israel. William’s marks the first time a member of Britain’s royal family visited Israel as an official representative of the London government.

British Foreign Office Minister Alistair Burt said the visit is an “important and unique opportunity to promote diplomatic and cultural ties in the region.”

Israeli Prime Minister Benjamin Netanyahu called it “a historic visit” and Palestinian Authority President Mahmoud Abbas said he hopes it will “contribute to strengthening ties of friendship between the two peoples.”

Although Britain and Israel are considered allies, Prince William’s visit comes at a time of some disagreement. Britain was critical of the United States moving its embassy from Tel Aviv to Jerusalem last month, and British Prime Minister Theresa May called for Israeli restraint after dozens of Palestinian protesters were shot to death at the Gaza-Israel border earlier this year.

Israel was supportive of President Donald Trump‘s withdrawal from the 2015 Iran nuclear deal, which Britain has pledged to uphold.

On Sunday, William and Jordanian Crown Prince Hussein watched a World Cup soccer match together and later visited the archaeological ruins of Jerash, a Roman city dating to the first century.

The site has a personal connection to the royal couple. Kate Middleton, Duchess of Cambridge, was photographed there by father Michael Middleton in 1984, when she was a child. Her family moved to Jordan when she was two years old after her father was relocated by his employer, British Airways. 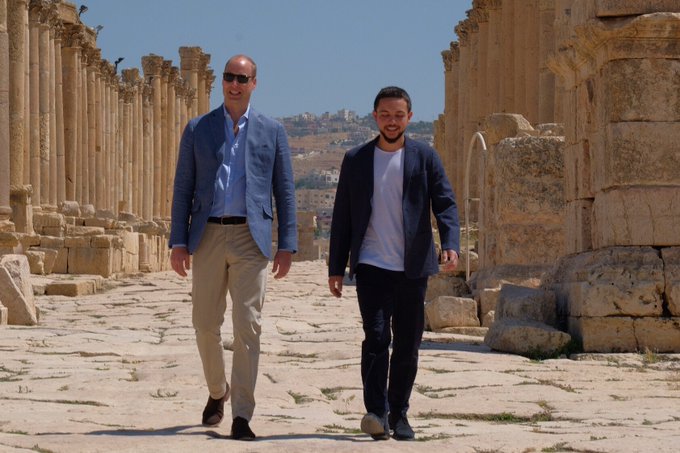 The Duke of Cambridge and The Crown Prince arrive at the spectacular Jerash archaeological site, a first century Roman city, and one of Jordan’s greatest tourist attractions.