Police spokesman Pierre Nkurikiye announced the “assassination” in a tweet.

Police also announced a woman who was traveling with Niyonkuru had been obtained for questioning.

Though recent months have been more peaceful, violence has been a constant in the small Central African nation since President Pierre Nkurunziza announced he would seek a third term in early 2015. Over the last two years, protestors have clashed with security forces, and a number of high-profile officials and politicians have been assassinated. At least 450 people have died.

Nkurunziza was reelected in late 2015. Members and supporters of the Opposition party boycotted the election. They argue Nkurunziza’s third term violates the Constitution and the peace agreement that ended the country’s last civil war.

Peace proponents and international groups remain concerned that ethnic tensions between Twa, Hutu and Tutsi peoples could become further inflamed. In 1994, close to one million Tutsi were killed by Hutu-controlled government forces in the infamous Rwandan genocide. 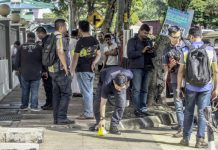 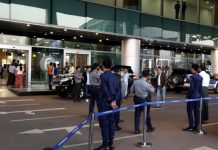