The CalWood Fire began burning in Boulder County on Saturday and quickly grew to 8,788 acres at just 5% containment as Boulder County Sheriff’s Office Division Chief Mike Wagner said it is already the largest blaze in the county’s history.

“It just exploded,” Wagner said. “We do believe multiple homes were probably lost. It’s still too dynamic to get in and begin to assess.”

The CalWood Fire is located just 50 miles southeast of the Cameron Peak Fire, the largest in Colorado’s history and the first to burn more than 200,000 acres, which was 62% contained on Sunday.

Wagner said the causes for both blazes in Boulder County remained under investigation as no lightning strikes or other likely weather events that could have sparked the CalWood Fire took place but the area has experienced “critically dry” conditions for weeks.

He added that efforts to combat the fires have been hampered by the weather.

The entire state of Colorado is experiencing drought conditions for the first time since 2013, with nearly 60% in extreme drought or worse, according to the U.S. Drought Monitor.

“We’ve been concerned for some time about the fire danger,” Wagner said. “It has been so dry.” 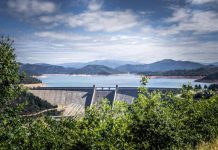