Feb. 24 (UPI) — Contractors were scheduled to begin the process of removing the USS Bonhomme Richard‘s island Tuesday as part of the vessel’s ongoing inactivation.

MIT AMERICAS is conducting the salvage work under an existing contract with the Navy.

Earlier this month, the Navy announced that the dismantlement of the Bonhomme Richard would begin on April 15.

The amphibious assault ship caught fire and burned for four days in San Diego in July.

The fire wrought extensive damage to the Richard’s flight deck, mast and tower levels that would cost up to $3.2 billion to repair or convert to another maritime use, Navy officials said in November, prompting a decision to decommission and scrap the ship, which had recently undergone a $250 million upgrade to accommodate takeoffs and landings of the F-35B fighter plane.

The Navy is still investigating the fire, but officials identified a potential arson suspect in August. 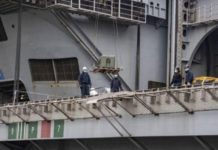 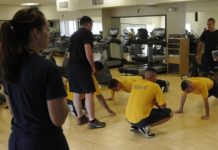 Navy pushes back window for physical fitness test due to COVID