Nov. 22 (UPI) — A controversial statue of former President Theodore Roosevelt that sits out front of the American Museum of Natural History in New York City will be relocated to North Dakota, officials said.

The Theodore Roosevelt Presidential Library, which is set to open in 2026, said it entered into an agreement with New York City for the long-term loan and reconsideration of the statue, which has resided outside the museum since 1940.

“We are grateful to the Theodore Roosevelt Presidential Library for proposing a fitting new home for the Equestrian Statue,” said Vicki Been, New York City’s deputy mayor for Housing and Economic Development. “This long-term loan would allow an important part of the city’s art collection to be appropriately contextualized, and we look forward to continuing to work with the library on next steps.”

The statue of the horse-mount 26th president flanked by walking Native American and African figures has been described as problematic due to its hierarchical depiction, and the museum had asked the city in June of last year, amid renewed calls to tear down controversial statues, for permission to remove it, which the city agreed to a year later.

The library agreed that the statue’s composition is problematic as is its current location for not allowing passersby consent or context.

The agreement, it said, will allow the library to relocate it to storage as it considers how to display the statue in a way so it can serve as a tool to study the nation’s past.

“Museums are supposed to do hard things,” said Edward O’Keefe, chief executive officer of the Theodore Roosevelt Presidential Library Foundation. “It is said that ‘those who do not learn from history are doomed to repeat it,’ and our job is to forthrightly examine history to understand the present and make a better future.” 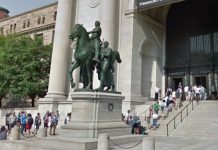