March 3 (UPI) — For more than a decade, the state of Arkansas did not put to death a single condemned inmate. Next month, it will execute eight.

Gov. Asa Hutchinson moved this week to reactivate the state’s death chamber after a request by Arkansas Attorney General Leslie Rutledge to go ahead with the sentences. The governor ordered the executions on Monday.

No inmate in the state of Arkansas has been put to death since convicted killer Eric Randall Nance died by lethal injection more than 11 years ago. Following his execution, the state’s death chamber remained dormant amid legal and operational challenges.

The effective deactivation of capital punishment in Arkansas represented an abrupt halt in the state’s practice, and followed a period in which nearly 30 inmates were executed between 1990 and Nance’s death in November 2005.

Aside from legal maneuvers that argued capital punishment is unconstitutional, the state’s department of correction has also had difficulties obtaining the necessary drugs to carry out executions — an obstacle several states have encountered in recent years.

Hutchinson’s reasoning for ordering the executions of all eight death row inmates before May appears to stem from the fact that the state’s supply of midazolam — one of three drugs used in the lethal mixtures — expires at the end of April. The drug has received intense scrutiny over claims it is often ineffective and has directly contributed to multiple cruelly botched executions.

Most compound pharmacies that in the past sold midazolam to states for executions have stopped making it available, on ethical grounds, leaving most prison departments without a source for the powerful sedative.

The men marked for death — at an unprecedented rate of two per day for four days — are Don Davis, Bruce Earl Ward, Ledelle Lee, Stacey Johnson, Marcell Williams, Jack Jones, Jr., Jason McGehee and Kenneth Williams. Davis and Ward are scheduled for April 17, Lee and Johnson on April 20, Williams and Jones on April 24 and McGehee and Williams on April 27.

“The Arkansas Coalition to Abolish the Death Penalty is outraged by … plans to carry out eight executions within the span of ten days in April,” the group said. “This planned mass execution is grotesque.”

Attorneys for the men have so far unsuccessfully appealed to state and federal courts seeking a stay of execution. Last week, the U.S. Supreme Court declined to hear the inmates’ arguments that Arkansas’ execution statutes, amended in 2015, are unlawful. After that refusal, Arkansas’ high court promptly ended a stay it granted last summer and Rutledge asked Hutchinson to schedule the death sentences.

“This action is necessary to fulfill the requirement of the law, but it is also important to bring closure to the victims’ families who have lived with the court appeals and uncertainty for a very long time,” Hutchinson said.

An amended challenge from the inmates’ lawyers, filed last week, claims that states’ use of midazolam does not have the intended effect during executions, saying the drug masks “torture by paralyzing the subject as he is burned alive from the inside.” It is intended to sedate the prisoner before two more drugs are introduced to paralyze and kill him. The second drug, pancuronium bromide, paralyzes the inmate and the third, potassium chloride, stops the heart.

“Unless the prisoner is unconscious, then drugs two and three will cause pain — torturous punishment, in violation of the Eighth Amendment, and state guarantees against cruel and unusual punishment,” Jeff Rosenzweig, an attorney for the prisoners, said.

The Supreme Court refused to hear the challenges because it previously stipulated that any legal challenge opposing a state’s use of midazolam in lethal injections must identify other available chemicals that can be used instead.

Rosenzweig said there’s a high probability that a botched execution will happen if Arkansas goes through with the sentences next month.

“The idea of killing that many people in that short a time period evokes an assembly line,” he said. 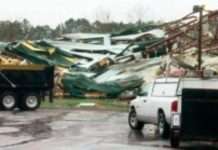