Oct. 25 (UPI) — The Dow Jones Industrial Average and S&P 500 hit record highs on Monday, while shares of a Trump-linked company dropped after skyrocketing at the end of last week.

Shares of Digital World Acquisition Corp, a special-purpose acquisition company tied to Donald Trump, fell 10.98% on Monday after reports it would merge with a media and social networking company the former president plans to launch.

Shares were boosted by rental company Hertz announcing it had ordered 100,000 Tesla vehicles to be delivered by 2022 as it aims to “offer the largest [electric vehicle] rental fleet in North America and one of the largest in the world.”

Facebook stock rose 1.26% ahead of releasing its earnings after falling earlier in the day and gained nearly 3% in after-hours trading after it reported better-than-expected earnings after the bell.

Alphabet, Microsoft, Amazon and Apple are also set to report earnings later this week after all four tech giants traded in the negative on Monday.

Of the 117 S&P 500 companies that have reported earnings so far, 84% have surpassed expectations as companies in the index are forecast to grow profit by about 35% in third quarter, according to Refinitiv.

Energy stocks provided a boost to the market as West Texas Intermediate crude features rose above $85 per barrel, with Chevron rising 0.93% and Exxon Mobil gaining 1.95%.

Lifestyle brand Allbirds also set the terms for its initial public offering Monday, planning to offer 19.2 million shares at $12 to $14 each.

The company would raise $268.8 million at the top end of the range at a valuation of more than $2 billion. 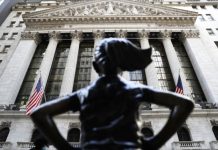