March 17 (UPI) — Dozens of people were killed and many more injured when a boat carrying Somali refugees was fired upon in the Red Sea, human rights groups said Friday.

The death toll was reported between 33 and 42 people, including women and children.

The New York Times reported it took several hours to bring the boat ashore. When it was finally brought to port, a grisly scene unfolded as bodies were laid on the ground and bloodied survivors were taken to hospitals in Yemen.

The attack happened in the Red Sea near the Bab al-Mandeb Strait off the coast of Yemen. Survivors told the BBC they were fired on by a helicopter.

Saudi Arabia has led a U.S.-backed coalition launching airstrikes against Houthi rebels who control portions of Yemen. The Saudis have used U.S.-made Apache helicopters to carry out some of those missions. 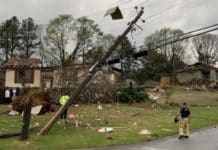