He was infamous for the “Golden Triangle” gambit of the 1970s, where he claimed to use fallen American soldiers coffins from Vietnam to transport heroin from southeast Asia to the United States.

“Who the hell is gonna look in a dead soldier’s coffin?” Lucas asked rhetorically in a 2000 New York Magazine article.

Lucas said he recruited a North Carolina carpenter and flew him to Bangkok to build coffins with false bottoms to hide the heroin. However, Ike Atkinson later disputed Lucas’ claim, saying he controlled the operation and the heroin was smuggled in teak furniture.

Still, his meteoric rise from poverty to a luxury life hobnobbing with celebrities, has made headlines. He flaunted his wealth in 1971, as he wore a long $100,000 chinchilla coat and matching $25,000 hat to an Muhammad Ali-Joe Frazier boxing match, and he claimed he was making over $1 million per day.

He died in Cedar Grove, N.J.

Lucas was born in LaGrange, N.C. on Sept. 9, 1930, and lacked a formal education. He moved to Harlem after witnessing the Ku Klux Klan murdering his cousin, and said the incident provoked his criminal life. He later became involved with mob boss Bumpy Johnson, who died of a heart attack in 1968.

Lucas’ reign ended in 1975, when he was arrested in a raid in his home in Teaneck, N.J., and sentenced to 70 years. However, his cooperation in an inquiry that led to dozens of drug-related arrests resulted in his release in 1981. A few years later he was convicted of new drug charges and imprisoned until 1991.

His story inspired the film “American Gangster,” where he was played by Denzel Washington.

In recent years, he used a wheelchair to get around and expressed remorse for his crimes, including helping his daughter with an organization for children of parents in prison and using proceeds from his autobiography, “Original Gangster,” to promote education.

“Please learn from my mistakes,” he told young readers. “Stay in school, finish high school and earn the highest degree in education that you can. This is the way to go in life.” 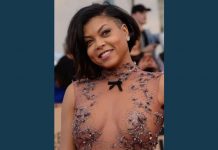