PARIS, Nov. 16 (UPI) — Multiple false alarms of more gunmen on the loose interrupted Parisians as they gathered to mourn those killed by a series of terror attacks.

A capacity congregation of about 1,500 attended a service Sunday at Paris’ Notre Dame cathedral while still more gathered outside the iconic church.

“Our country knows the pain of mourning and must face barbarity propagated by fanatical groups,” Paris Archbishop Andre Vingt-Trois said in a statement ahead of leading services at Notre Dame.

Crowds inside and outside the cathedral were panicked briefly by false reports of gunmen in the audience. It was one of many false reports circulating in Paris Sunday.

One vigil at the Place de la Republique was interrupted by firecrackers. The crowd of several hundred people scattered, many into a nearby subway station, thinking the noise was gunfire.

The Grand Mosque of Paris, the city’s largest mosque, was closed, and a brief prayer ceremony was conducted at the Synagogue de la Victoire, its largest Jewish holy place. France is a largely Catholic country of about 67 million people. About 5 million are Muslim and about a half-million are Jewish; the majority of the Muslim and Jewish populations reside in the Paris vicinity.

Meanwhile, the government restricted the assembly of large groups until Thursday, and French President Francois Hollande sought the approval of parliament to extend a state of emergency for several months. Cultural sites in Paris were scheduled to reopen Monday. 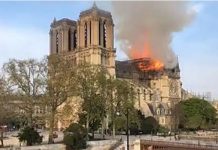 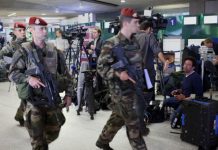