EUREKA COUNTY, Nevada, May 13, 2019 (Gephardt Daily) — Federal investigators are on the scene of a reported mining death in Eureka County, Nevada.

According to a press release from the Eureka County Sheriff’s Office, emergency crews were notified of an unresponsive male in a truck at the McEwen Mine about 9:45 a.m. Monday.

By the time outside help arrived, members of the McEwen Emergency Response Team were already attempting to revive the victim, but “after extensive efforts, lifesaving measures were unsuccessful,” the news release states.

The deceased has been identified as Colorado resident Dean V. Pilcher.

Pilcher was an employee of N.A. Degerstrom, a mining company contracted with McEwen Mining.

The U.S. Mine Safety and Health Administration was notified and has been conducting an investigation at the scene.

According to the news release, this is the first mining death of 2019 in Eureka County. 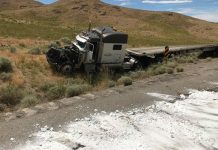