March 7 (UPI) — Residents in the Northeast are bracing for another round of winter weather that paralyzed the Midwest this week — causing snow-packed and icy roads, power outages and at least 1,500 flight cancellations.

The eastward-moving storm dumped enough snow and ice on South Dakota to cause major travel disruptions as key thoroughfares were shut down, including the entire 252-mile stretch of Interstate 29.

As the storm moved northeast Wednesday, more than 50 million peoplewere under a storm watch or warning, with some areas expecting up to 18 inches snow.

Forecasters said a combination of heavy, wet snow with strong winds could lead to power outages for millions — a repeat of last week’s nor’easter that left 2 million homes and businesses in the dark.

Airports in New Jersey, New York and Philadelphia had canceled more than 1,500 flights by Wednesday morning. By midday, flight-tracking website FlightAware reported more than 2,500 cancellations and 6,400 delays nationwide. The website’s MiseryMap showed most of the delays involve flights in and out of the Northeast.

States of emergency were declared Tuesday for Pennsylvania and New Jersey, and New York issued travel advisories in the state, some of which was forecast to see 16 inches of snow.

Accumulations of up to a foot are expected in parts of northern New Jersey and into New England, and are expected to dissipate early Thursday as the storm moves offshore. 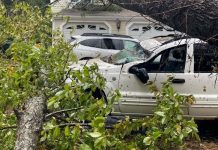