“During the night of June 4 to 5, armed individuals attacked the village Solhan in the commune of Sebba in the Sahel region,” Kabore said in tweet. “I bow to the memory of the hundred civilians killed in this barbaric attack and send my condolences to the families of the victims.”

A government spokesman told Bloomberg in a separate statement the gunmen were suspected militants, and several homes and the village’s market were burnt down.

The government did not say who was responsible for the attack.

Kabore declared three days of national mourning in light of the tragedy in another tweet.

He called for unity “against the forces of evil,” and added that security forces were working to find the perpetrators.

Insurgency has hit Africa’s Sahel region since militants captured large parts of the northern region of Burkina Faso’s neighbor Mali in 2012 and 2013, the BBC reported. 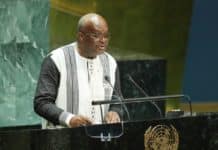