March 30 (UPI) — Holland America said Sunday its cruise ship Zaandam, in which four passengers died and several onboard have reported influenza-like symptoms, was granted passage through the Panama Canal to sail to South Florida.

The vessel has remained stranded at sea for weeks with 1,243 guests and 586 crew members.

“We are aware of reported permission for both Zaandam and Rotterdam to transit the Panama Canal in the near future,” the cruise line said Sunday in an update on Facebook.

“We greatly appreciate this consideration in the humanitarian interest of our guests and crew. This remains a dynamic situation, and we continue to work with the Panamanian authorities to finalize details.”

In a news release Sunday, Port Everglades in Fort Lauderdale said the cruise line has not received official approval to transit the canal nor enter the port. It then will take “about three days” to reach South Florida, according to the release.

The cruise line plans to transfer groups of healthy Zaandam guests to the Rotterdam, with strict protocols for this process developed in conjunction with the U.S. Centers for Disease Control and Prevention.

The Zaandam is anchored outside the Panama Canal.

Fort Lauderdale Commissioner Michael Udine told the Sun Sentinel that most of his constituents don’t want the ship to dock.

As a compromise, he said Port Everglades notified county commissioners late Saturday with its mandates for the passengers. They include all illnesses and conditions must be accurately disclosed and documented; the cruise line, at its expense, will provide all protective equipment to all responders; temperature readings are required for all disembarking crew and passengers; and the cruise line, at its expense, will arrange for private ambulance transportation.

The cruise ship had sailed to South American and was first denied entry into Chile.

Since then, four people died, two just tested positive for the coronavirus and the number of passengers and crew with flu-like symptoms increased to 138. The cruise line said 53 guests have reported the symptoms.

Princess Cruises’ Diamond Princess was quarantined for weeks since Feb. 3 off Yokohama ear Tokyo after stopping in Chinese ports.

At least 712 out of the 3,711 passengers and crew had tested positive for the virus. That includes 10 fatalities.

About 400 Americans, including 46 testing positive, were flown on government charter planes to the United States.

Also, the Grand Princess docked in Oakland, Calif., on March 9 instead of its San Francisco destination after 21 people were diagnosed with the disease. It waited off the California coast for four days.

Initially, two passengers and 19 crew members tested positive for the virus. American passengers were transported to military bases in California and San Diego for 14-day quarantine.

Two passengers died and at least 103 have been confirmed positive for the new coronavirus, federal officials said Thursday. 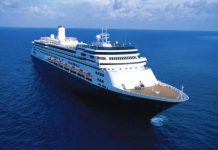