April 20 (UPI) — Sales of existing homes in the United States slid by almost 3% last month, according to industry data on Wednesday — but the median price for houses set an all-time high.

The National Association of Realtors said in its monthly report that sales declined by 2.7% for the month of March — and were 4.5% off the figure from March 2021.

The median price for all housing types, however, rose to $375,300 — the highest mark on record.

The price figure continues 121 consecutive months of year-over-year increases. The association said that stretch is the longest sustained price increase ever.

Factors that are contributing to the higher prices are limited inventory and higher interest rates.

“The housing market is starting to feel the impact of sharply rising mortgage rates and higher inflation taking a hit on purchasing power,” NAR Chief Economist Lawrence Yun said in a statement.

“Still, homes are selling rapidly, and home price gains remain in the double-digits.”

Total housing inventory at the end of March was about 950,000 units — up 12% over February, but down 9.5% from 2021. The report said that properties remained on the market for an average of 17 days in March, a slight decrease.

Wednesday’s report also said that first-time buyers accounted for 30% of March sales, a significant decline from a year ago. 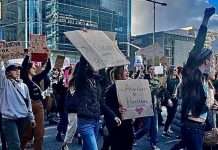