WASHINGTON, Sept. 24 (UPI) — Residents of Cedar Rapids and other parts of Eastern Iowa spent Saturday reinforcing preparations for floodwaters as some were evacuated from their homes and others were set to be told to leave later Saturday night.

The National Weather Service on Saturday afternoon issued a flood warning for eastern Iowa that river waters would continue to rise, in some cases until sometime Sunday and others not until the middle of the week, and state officials spent the day moving to protect property and help people get to safety.

Evacuations have been recommended for more than 5,000 people in Cedar Rapids, with Iowa National Guard and other officials working to help where needed and make sure people are aware of the danger posed by floodwaters. The National Guard also will be enforcing a curfew from 8 p.m. Sunday night until 7 a.m. Monday morning in areas that are being evacuated.

Depending on rain, the city is advising residents the river could reach 28 feet deep — which would inundate homes in the area if rain continues to fall.

The Red Cross has already started opening shelters in affected areas of the state, and state officials had joined homeowners in lining sandbags, protecting property and offering advice to care for pets.

Although the evacuations are not mandatory, officials said it was strongly recommended based on the warnings issued by the National Weather Service.

“I hope next week… I can proclaim that no lives were lost,” Corbett said. 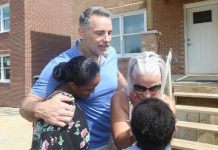