March 11 (UPI) — A jaguar attacked a woman who had crossed over a barrier to get closer to the animal’s enclosure to take a photo, according to authorities.

The woman, who is in her 30s, was attacked at around 6:45 p.m. Saturday at the Wildlife World Zoo in Litchfield Park, Ariz., resulting in deep gashes to her arm, CBS 5 News reported.

The woman was taken to a local hospital and is expected to recover.

The zoo said the woman had crossed over the barrier to get a picture when the animal attacked.

“The visitor sustained non-life threatening injuries to their arm from one of our female jaguars. At the request of the family, paramedics were called,” the zoo said in a statement. “At no time was the animal out of its enclosure.”

The incident is being investigated, the zoo said.

This is not the first time the jaguar has attacked a guest who had crossed the barrier, zoo director Mickey Ollson said.

“There’s no way to fix people crossing barriers,” said Ollson. “That happens occasionally. And we put substantial barriers there and if people cross them, they can get in trouble.”

The Humane Society of the United States said that people sometimes get a false impression that the animals in zoos are approachable.

“Throw in a healthy dose of poor judgment, and incidents like this are bound to happen,” Humane Society CEO and President Kitty Block said in a statement to UPI following the attack. “We urge the zoological community exhibitors to set a higher standard to protect people and to respect wildlife from a safe distance by doing away with public contact opportunities with wildlife of all species.”

Following the incident, the zoo received several worried inquiries over what will happen to the animal, to which the zoo reassured them that the animal would not be euthanized.

“We can promise you nothing will happen to our jaguar,” the zoo said in a tweet. “She’s a wild animal and there were proper barriers in place to keep our guests safe — not a wild animal’s fault when barriers are crossed.” 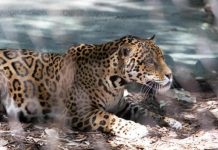