Jan. 15 (UPI) — A federal judge on Friday declined to stay the scheduled executions of two Oklahoma death row prisoners who took issue with the drugs used in the state’s lethal injection protocol.

Donald Grant is set to be executed Jan. 27 and Gilbert Postelle is scheduled to die Feb. 17. Attorneys for the two men said the state’s use of midazolam in its three-drug lethal injection cocktail is inappropriate.

U.S. District Judge Stephen Friot, of the Western District of Oklahoma, refused to block the state’s planned executions, saying the two men were unlikely to be able to prove that the use of the drug would cause any more pain than that caused by the insertion of the IV.

Oklahoma and several other states use midazolam in their execution protocols as a sedative. The state then administers vecuronium bromide, a muscle relaxant, and potassium chloride, which stops the heart, according to the Death Penalty Information Center.

Donald Grant and Postelle are among several Oklahoma death row prisoners suing the state over its lethal injection protocol after earlier botched executions.

The state announced on Feb. 13, 2020, that it planned to resume executions nearly six years after the use of an incorrect drug led to the botched execution of a convicted murderer.

Oklahoma’s lethal injection protocol came under scrutiny in 2014 when Clayton Lockett died of a heart attack amid complications during his execution.

Autopsy reports released a year later indicated Oklahoma corrections officials used the wrong drug — potassium acetate instead of potassium chloride — during the process. Lockett complained of a burning sensation and attempted to raise his head and speak after doctors declared he was unconscious.

The same incorrect drug was delivered to corrections officials for use in the planned 2015 execution of Richard Glossip. Former Gov. Mary Ballin called off Glossip’s execution with a last-minute, indefinite stay after she learned of the discrepancy.

Oklahoma carried out two executions in 2021 after resuming the punishment, that of John Grant on Oct. 28 and Bigler Stouffer on Dec. 8.

Postelle was sentenced to death for the 2008 murders of James Alderson and Amy Wright at a Del City mobile home park. He received a lesser sentence for killing Donnie Swindle and Terry Smith.

Donald Grant was sentenced to death for the 2001 murders of two Del City motel workers, Brenda McElyea and Suzette Smith. 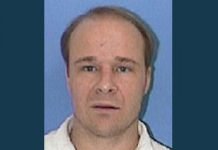