Feb. 11 (UPI) — A federal judge on Monday indefinitely suspended former national security adviser Michael Flynn’s sentencing on a charge of making a false statement to the FBI as he seeks to withdraw his guilty plea.

U.S. District Court Judge Emmett Sullivan announced the hearing originally set for Feb. 27, will be canceled “until further order of the court.”

Flynn had been scheduled to be sentenced for lying to the FBI about his contacts with former Russian ambassador Sergey Kislyak during his testimony as part of former special counsel Robert Mueller’s investigation into Russian meddling in the 2016 presidential election.

Sullivan did not immediately schedule a new sentencing date, but did set deadlines for additional filings through early March and has said he may hold a hearing on Flynn’s request to withdraw his plea.

On Sunday, federal prosecutors filed a motion seeking a delay of several key deadlines in Flynn’s case, citing that his request to withdraw his guilty plea may require additional testimony from his former lawyers at the law firm Covington & Burling.

Flynn asked to withdraw his guilty plea on Jan. 14, stating prosecutors broke the agreement for his cooperation when they requested he receive jail time instead of probation. 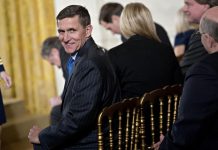