Long considered one of the strongest contenders for the post, Truss becomes only the third woman to lead the British government behind her role model Margaret Thatcher and Theresa May. Rishi Sunak received 43% of the Conservative Party vote.

Sunak said on Twitter after the election, “It’s right we now unite behind the new PM, Liz Truss, as she steers the country through difficult times.”

She will officially take the post Tuesday after meeting Queen Elizabeth II. In her first speech, Truss praised Johnson, whom she served under in her current position.

“Boris, you got Brexit done, you crushed Jeremy Corbyn, you rolled out the vaccine, and you stood up to Vladimir Putin,” Truss said, according to CNN. “You are admired from Kyiv to Carlisle. I know that our beliefs resonate with the British people. I campaigned as a Conservative and I will govern as a Conservative.”

Truss promised to cut taxes and grow the economy in her term.

“I’d like to congratulate our next Prime Minister Liz Truss as she prepares for office,” Starmer said in a Twitter post. “But after 12 years of the Tories, all we have to show for it is low wages, high prices, and a Tory cost of living crisis. Only Labor can deliver the fresh start our country needs.” 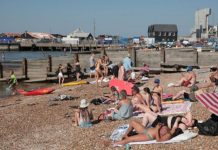