July 15 (UPI) — An argument over wearing face masks at a convenience store in Michigan led to a 77-year-old man being stabbed and his suspected attacker being shot to death by police Tuesday, state police said.

The altercation happened around 6:45 a.m., when 43-year-old Sean Ernest Ruis entered the Quality Dairy store in Windsor Township without wearing a mask. The 77-year-old man, whose identity wasn’t revealed, confronted the man about wearing a mask, which was required by an order signed by Gov. Gretchen Whitmer.

The argument continued outside the store, where Ruis allegedly stabbed the 77-year-old man before fleeing. The older man was hospitalized in stable condition.

An Eaton County sheriff’s deputy tracked Ruis down in a neighboring town around 7:15 a.m. and pulled over his vehicle. Surveillance footage, which is graphic in nature, appears to show Ruis exiting his vehicle before lunging toward the deputy, who opened fire. Ruis falls to the ground after several gunshots.

The sheriff’s office said Ruis had a knife in his hand as he ran toward the deputy.

Eaton County Sheriff’s Tom Reich said the deputy who opened fire was placed on administrative leave during an investigation into the shooting.

“It’s very unfortunate that she had to use her weapon but she saved her life; that’s the most important thing right here,” he said.

Michigan Department of Transportation spokesman Jeff Cranson said Ruis worked for the department as a transportation technician since 2008.

The altercation over face masks was the second in Michigan to result in someone’s death. A dollar store security guard died during a confrontation with customers in May. 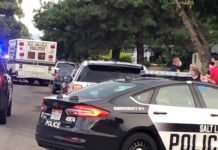 Police: Woman arrested in Salt Lake City after stabbing another woman in the head 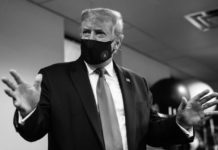