Pelosi ran unopposed as well as House Majority Leader Steny Hoyer, D-Md., and House Majority Whip Jim Clyburn, D.-S.C. The three Democrats have held their positions in the House for the last 14 years.

“As we go forward with liberty and justice for all, we must do so, listening to the American people, listening to each other with respect, acting to unify,” Pelosi said. “Joe Biden is a unifier, so that will make it easier for us.”

The Democrats will enter the next Congress with about 221 seats after holding 232 seats in the last session. That number could change with several House races still undecided. 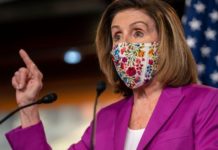