Oct. 12 (UPI) — Search and salvage teams recovered the wreckage of a helicopter and the remains of five crew members who died in a military crash off the coast of San Diego in August, the U.S. Navy said Tuesday.

The Navy said the wreckage of the MH-60S Seahawk and the remains of the five crew members were recovered from a depth of approximately 5,300 feet on Friday.

The ship transporting the wreckage arrived at Naval Air Station North on Sunday and the remains were transferred to Dover Air Force Base in Delaware for identification.

Six people were on the helicopter at the time of the crash and one sailor was rescued.

Officials said the Navy held off announcing the recovery of the remains until all the crew’s families were notified.

The crash took place during “routine operations” as it took off from the deck of the aircraft carrier USS Abraham Lincoln.

An investigation into the cause of the crash is ongoing and the recovery of the helicopter is expected to help investigators determine what led to the reported vibrations that occurred on the aircraft before the crash. 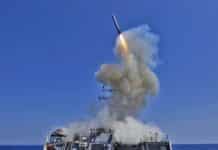